Rock Out for Eli: Benefit Concert | Kids Out and About Philadelphia

Rock Out for Eli: Benefit Concert 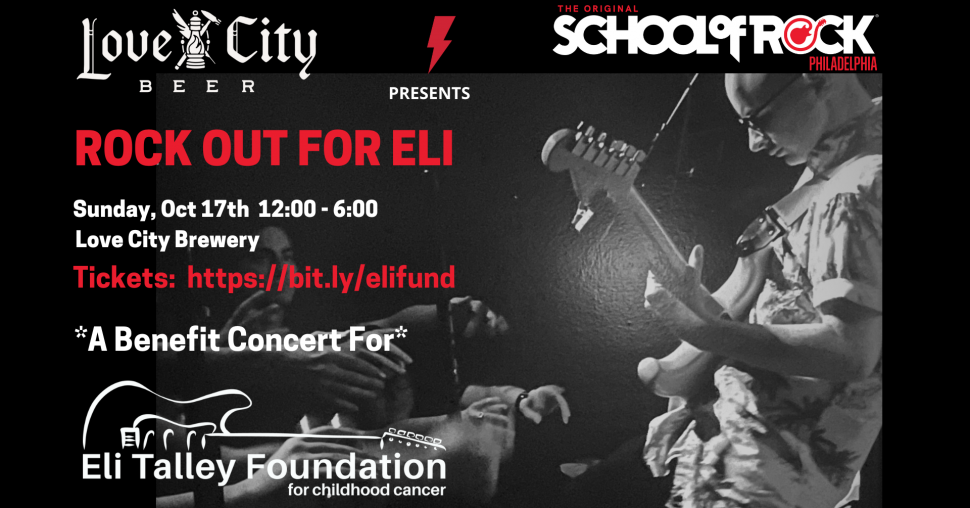 School of Rock Philadelphia will be hosting an afternoon of live music, drinks and food at Love City Brewing to benefit the Eli Talley Foundation on Sunday, October 17th from 12:00 - 6:00 PM. The Eli Talley Foundation is a non-profit organziation whose mission is to positively impact the lives of children with cancer through the gift of music, help fund important research, and assist families on their journey through childhood cancer.
Click here for more information about this activity
Please help us keep this calendar up to date! If this activity is sold out, canceled, or otherwise needs alteration, email mindy@kidsoutandabout.com so we can update it immediately.

Eli Talley was a talented musician and beloved student at School of Rock Philadelphia. Originally from Arkansa, Eli and his parents lived in Philadelphia for several years so he could receive treatment for Neuroblastoma (a form of pediatric cancer) at CHOP.  Music, both listening and performing, was an integral part of Eli's coping with a chronic and debilitating illness.

Six bands will perform throughout the afternoon. The musicians playing in this event all have a connection to Eli, either as a band mate, an instructor, friend or as a fellow student who was inspired by his talent, skill, and story. Headlining the concert will be the acclaimed Philly alt-rock band, Alright Junior whose vocalist and guitar player, Jace Miller, had a close and personal relationship with Eli and his parents.

The concert event will be held at Love City Brewing, 1023 Hamilton Street, Philadelphia,

Tickets can be purchased at https://www.eventbrite.com/e/170362121692 and are $15 in advance or $20 at the door.  100% of ticket sales go directly to the Eli Talley Foundation.
Learn more about Eli and the foundation that was created in his honor at https://elitalleyfoundation.org