BeyondTheNest.com Reviews Thurgood at Geva Theatre Center | Kids Out and About Philadelphia 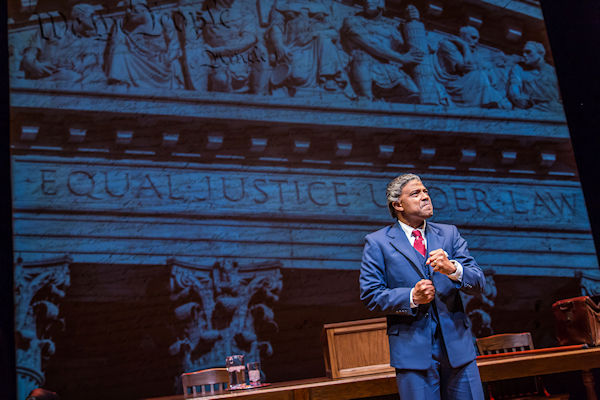 In 1967, against incredible odds, a lawyer of humble beginnings named Thurgood Marshall became the first black man named to the Supreme Court of the United States.

In his own less-ostentatious way, Justice Marshall did as much for civil rights in this country as did Martin Luther King. Like a nimble judo master, he used the weight and power of the law against itself in fighting against injustice, and for equal rights of all humans. The words of the Constitution, which he learned by rote in his grade school’s “boiler room of misbehavior” became his mightiest sword.

In Geva Theatre Center's masterful production of Thurgood, Lester Purry doesn’t just take on the role of Thurgood Marshall. He becomes the man. The actor’s candid conversation about Thurgood’s successes, failures, and close calls, caused ripples of audible murmurs, including an “ah” here, an “oh no” there, a gasp elsewhere and spontaneous applause, bearing testament to how well he had secured their belief in his character.

A one-man show can be challenging to pull off successfully, but in this case, the two-hour show passes too quickly. Between riveting writing by George Stevens, Jr., expert direction by Lou Bellamy, and Purry’s nuanced character and storytelling skills, we have a perfect storm of talent.

As he steps on to the stage -- his former classroom at Howard University Law School -- Purry is the elderly Marshall… recounting his boyhood in Baltimore, then attending Howard University, courtesy of his father’s insistence on debating every little thing, his mother’s sale of her wedding and engagement rings, and his own persistence. Once he begins telling us of his early years as a young attorney, the years fall away. On the wings of his words, along with Justin Ellington’s sound design and Rasean Davonte Johnson’s projection design, we are carried back to the dusty roads of South Carolina where he fears for his life, to the offices of the NAACP Legal Aid and Defense Fund he founded, and to the halls of justice where he argued many a case.  We see the humorous, self-assured dynamo he must have been, arguing cases before the Supreme Court before he took his own rightful place on the bench.

Geva’s production of Thurgood is not only exceptional, it is a timely presentation for uncertain times. Through vivid storytelling, the play reminds us of a dark and appalling past we would do well to remember...so it is never repeated.

Thurgood can be seen on the Wilson Stage through November 18. Recommended for audiences age 14 and over.  Click here for information or to purchase tickets.