Live What You Love | Kids Out and About Philadelphia

Live What You Love 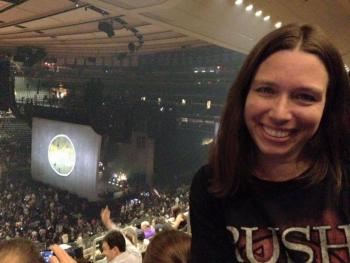 I have been a fan of the rock band Rush since I was a teenager. Back in the '80s, it was not yet fashionable to like Rush, certainly not for women. The other kids made fun of me; of course they did, it's what kids do. We Rush fans were considered "naive"... "outsiders"... "nerds." So we listened to "Subdivisions" from their 1982 album Signals, and felt better.

Fast forward to the Summer of 2015, Rush's 40-year anniversary tour: In the last 5 years, the trio is finally getting the respect they deserve. Geddy Lee, Alex Lifeson, and Neil Peart are selling out what will probably be their last major North American tour, and reviewers are trying their best to be both original and poetic as they reverently describe the R40 concert experience. Rolling Stone has not only stopped sneering, they put Rush on their cover for the first time last month. Even if you don't like the music, you can't help having respect for 40 years of hard work and dedication to artistic excellence.

Everyone has art that feeds their soul, and Rush has fed mine for 30 years. Rush fans of the '70s and '80s grew up and became computer programmers and teachers and doctors and publishers as well as music lovers...and then we made sure our kids, too, have grown up on "Anthem," "Bravado," "What It Is," and "The Garden" as well as, of course, "Subdivisions." In 2012, my girls were finally old enough to appreciate a Rush concert; I was determined that they'd have a great experience, so during the Clockwork Angels tour I became the originator of the "Take Your Daughter to Rush Day" concept.

For R40, I saw Rush in Buffalo on June 10, and then again in Newark, NJ on June 27. At intermission in Newark, I realized that I'd be a hot mess for the second set if I thought this was going to be my last Rush concert ever, so I resolved to get tickets two nights later for Madison Square Garden in New York City. That got me through the Newark show. Of course, it then really hit me at MSG: I started sniffling when the curtain came up for "Tom Sawyer," and I was sobbing by the time we hit "Closer to the Heart" (those chimes, dammit). But I get to do that; I'm a girl.

We can't really choose what we love, can we? We can only choose whether to give it expression or damp it all down to conform to others' expectations. Some of my friends love Disney World, exercise, fishing, Monster Trucks, or salsa dancing in the rain. None is my scene, but who am I to slice their buzz? Living life to the fullest demands that you live what you love. Being a Rush fan started teaching me that in the mid-'80s, and it's a lesson that never grows stale.

Growing up means, in part, understanding that we should never stomp on someone's joy. But how do we teach kids not to do this? It seems to come so naturally to them as they seek to define themselves in the world.

Live what you love. Help your kids do the same. Don't let anyone tell you different.

Debra Ross is founder and publisher of KidsOutAndAbout.com, as well as the author of Seasons and Reasons: A Parent's Guide to Cultivating Great Kids. A version of this essay was originally published as the publisher's note for the KidsOutAndAbout.com weekly e-newsletter for July 9, 2015. Click here to find a local KidsOutAndAbout site that will tell you about all kinds of upcoming activities for kids and teens where you live.